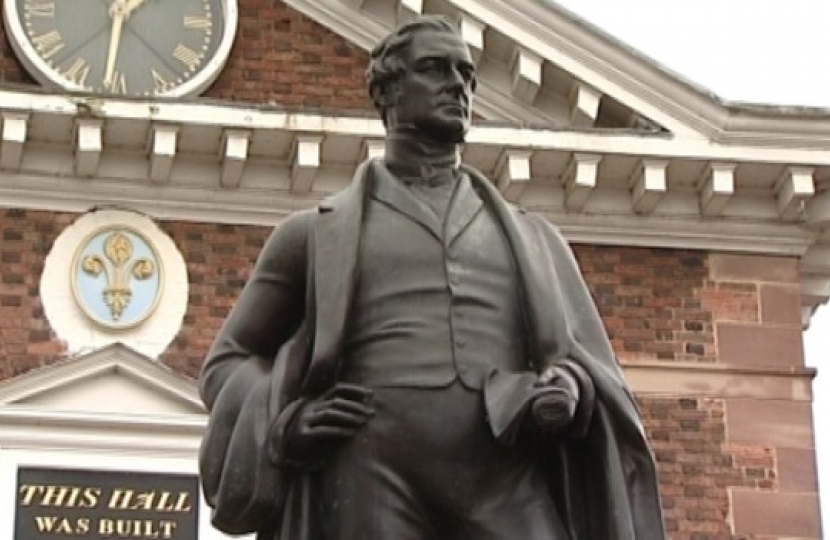 The association is managed by a small volunteer committee called the Officer Group. They manage the organisations day to day activities on behalf of the association executive committee. The officers are elected by the association membership annually and are drawn from all corners of the membership.

The association has an active and varied social offering, providing events to suit all people. These include everything from afternoon coffee morning to formal dinners. The association maintains an office in Tamworth so we can campaign all year round to support our hardworking councillors and MP.

The constituency takes it name from the largest population centre in its boundaries and has over 75,000 electors spread across rural and urban areas.

The Tamworth Constituency replaced the old South East Staffordshire constituency for the 1997 general election. It has remained unchanged since then. The seat is represented by Christopher Pincher in Parliament and he was elected in 2010, having previously stood in 2005.

The seats takes in all 10 wards of Tamworth Borough, and the following wards of Lichfield District Council: Bourne Vale, Fazeley, Little Aston, Mease and Tame, Shenstone, and Stonnall. These areas include Little Aston, Shenstone, Stonnall, Wall to the west of Tamworth. The surrounding villages of Hints, Canwell, Hopwas, Drayton Bassett and Hints. Fazeley, Bonehill & Mile Oak and finally the numerous villages north of Tamworth from Wigginton and Elford, north to the boundary of the NMA.

Since its 1997 the seat was branded a bellwether, reflecting the largest party in terms of seats in the House of Commons with the largest share of the vote for the candidate locally. However, the seat has heavily trended towards the Conservatives in the most recent general elections, with majorities in excess of 10,000 in both 2015 and 2017. The majority currently stands at 19,634.

The seat has a rich history with the Conservative Party. The Prime Minister and leader of the breakaway Tory group, the Peelites, Sir Robert Peel, represented the area for a long period 1830–1850, as did his father, brother and son at different periods. The town was also the venue for the launch of the Tamworth Manifesto, which was a political manifesto issued by Sir Robert Peel in 1834, which is widely credited by historians as having laid down the principles upon which the modern British Conservative Party is based.

Chris Pincher was born in Walsall and grew up in Wombourne near Wolverhampton.  He lives in within his constituency in Shenstone.

A Midlander through and through, Chris was first elected as the Conservative Member of Parliament for Tamworth in May 2010, and was re-elected in December 2019 with a majority of 19,364.

From 17 July to 15 June 2016 he was transferred to the Whips Office becoming  Assistant Whip then climbing to Comptroller of HM Household from June 2017.  In January 2018 Chris became Deputy Chief Whip Treasurer of HM Household ensuring Government legislation passed, despite the slim majority in Parliament.

On July 25, 2019 he was appointed Minister of State at the Foreign and Commonwealth Office for Europe and the Americas.  This means Chris looked after affairs with Europe, the European Union, NATO and the OCSE. He played a key role in the Brexit process.  Chris also had responsibility for policy towards the Americas including Cuba.  Diplomacy, migration, security and defence, technology, prosperity and the United Kingdom's work with the British Overseas Territories.

On Jan 13, 2020 Chris was appointed as Minister of State at the Ministry of Housing, Communities and Local Government.  His focus is on housing and delivering the Government's commitment to build the housing that people need.  He looks forward to getting stuck in to the new role.

To find out more about Chris visit is website: https://www.christopherpincher.com/

Tamworth Borough Council has a new Leader after Cllr Jeremy Oates was appointed to the role with immediate effect during a meeting of the Full Council on Tuesday, February 23.

Investing in our History and Heritage

Recently Conservative run Tamworth Borough Council gave us a great insight into the works currently taking place to get Tamworth Castle not only ready for reopening but also presenting and exciting new offer.

Major proposals to transform Tamworth town centre into the busy, thriving, heart of the community as part of a ‘once in a generation’ opportunity, can now be revealed.

A popular feature of the Tamworth Castle Grounds is set for a six-figure facelift!

A sum of £375,000 has been earmarked for the regeneration of the play area. It will see the much-used site brought back up to standard, to meet the ever changing world we live in.

The Gateway symbol on the A5 is a landmark entrance to Tamworth and Staffordshire.

Tamworth's local conservative councillors are passionate about Tamworth's history and heritage but recently theres been some challenges that have had to be met.